Kegerators are dispensing /refrigerator devices that allow anyone to have one or more kegs of chilled beer from a tap. These commercial kegs as well as home brewed beer can be served with a kegerator, and the quality will be just the same as the one sold at your brewpub or local tavern. Kegerators are easy to build and operate which is quite cost effective. 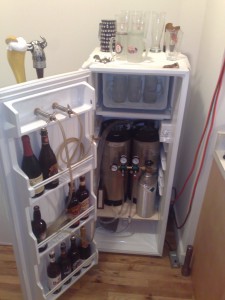 16 Steps to Make a Kegerator

1. Understand the basic parts of kegerator. The refrigerator has a tap that beer is dispensed; the beer is forced out by carbon dioxide that is added to the keg. A small cylinder (tank) of Carbon dioxide is used to maintain a specific pressure and as well supply the gas pleasure in the keg to make it dispensable evenly at any time. A regulator is attached to the gas cylinder to enable regulate pressure. There is also vinyl tubing that runs from the gas cylinder and regulatory in to the “in” port of the keg, and from the out port the keg is the “beverage” or “beer” line.

2. Obtain the necessary parts and components. These components depend on type of beer to be dispensed and the number of kegs that comes out of the tap at the same time.

3. These components can be found in a kegerator kit and generally include:

4. Carefully read all the instructions and warnings for all parts. Make sure you understand how to use and operate the CO2 gas regulator and cylinder. Always keep gas cylinders in an upright position and secured

7. Drill one a hole (generally 1/8”, 7/8”, or 1”) that will comfortably accommodate the faucet shank. To be sure check the shank before deciding a drill bit, and also account for the refrigerator’s thickness.

8. Clean and sanitize the components. Anything that comes into contact with beer that is the shank, beer faucet, beer line, hardware and other associated components.

9. Insert the beer faucet and shank assembly through the refrigerator then secure using the included hardware. Attach beer line to connector that attaches it to the keg and then attach the beer line to the faucet shank tailpiece. All gas and beverage lines must be completely secured to avoid leakage.

10. Carefully attach the gas line to the regulatory outlet and to the keg gas line in coupler gas inlet or connector. Gas line should be approximately 3ft or more in length.

11. Confirm that the CO2 cylinder is filled properly connected to the gas regulatory and completely shut off.

12. Connect the beer line to the keg.

14. Make sure all connections are secure and the tap is closed.

15. Pressurize the keg for dispensing. Turn on the main CO2 cylinder gas valve while the gas regulatory is off. Then open the regulatory and very slowly adjust the regulatory to about 12PSI letting the gas enter the keg.

16. Try dispensing some beer from the faucet. Inadequate gas pressure result in air spaces in the beer line you can adjust the pressure in the keg using gas regulatory to achieve desired beer foam.

You should never be intimidated by apparent complexity of kegerators. Once you assemble be obvious that your kegerator is actually easy, and simple to operate without ruling out the fact that it is affordable and cost effective.  If you would rather have a pre-made kegerator, check out our top 3 best kegerators.